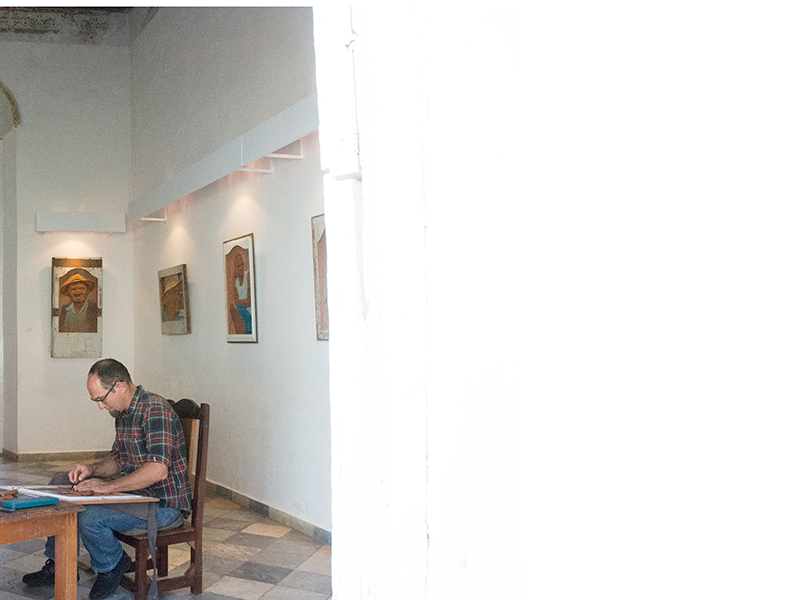 He sat just behind the door, the light was white and the sunshine warm. There was a picture of an old man lying on a wooden table. Lazaro Niebla is carving its shape into a recycled wooden panel.

Niebla, 43, was born in Cienfuegos but came to Trinidad to study art. He has three daughters, a wife and an art gallery in one of the oldest cities on the Island. With his bas-reliefs he tries to keep a record of Cuban life in the countryside, while helping some of his friends in need.

“I do the pictures as spontaneous as possible and create a relation with them; I’m trying to make them as natural possible,” Niebla said.

Before Niebla opened his gallery, he was a sculpting teacher in Trinidad. Supply shortages made it hard to access materials during the special period, after the USSR dissolved and its economic support to the island vanished. Niebla had to save money for over ten years by selling ceramics to be able to buy his own place.

“When I left school, it was a romantic period, everyone had that spirit about art and making thing that were beautiful without thinking of the market,” Niebla said. “I tried to keep that spirit during the 90’s when there was not tourism.”

However, “there is no arts market in Cuba,” Niebla said. In order to make money for his family, Niebla had to start selling his works to the tourists. “Now I commercialize my work, but I try to be as sincere as possible.”

Three years ago, Mariesa Sun-Saenz, the member of the US Cuba artists exchange organization and now the Niebla’s manager decided to offer some help. She started to sell Niebla’s art and hold exhibitions in the United States.

“He is humble, very thoughtful, quiet observant, very interested to giving back to the community, and helping other people,” Sun-Saenz said. “An good example of essentially becoming almost like a middle-class Cuban and not forgetting where they came from.”

Lazaro Niebla’s works range from $1200-$15000. At that price point, he is able to keep doing his works while helping his family and some friends get by. His next exhibition will be in July in Los Angeles. 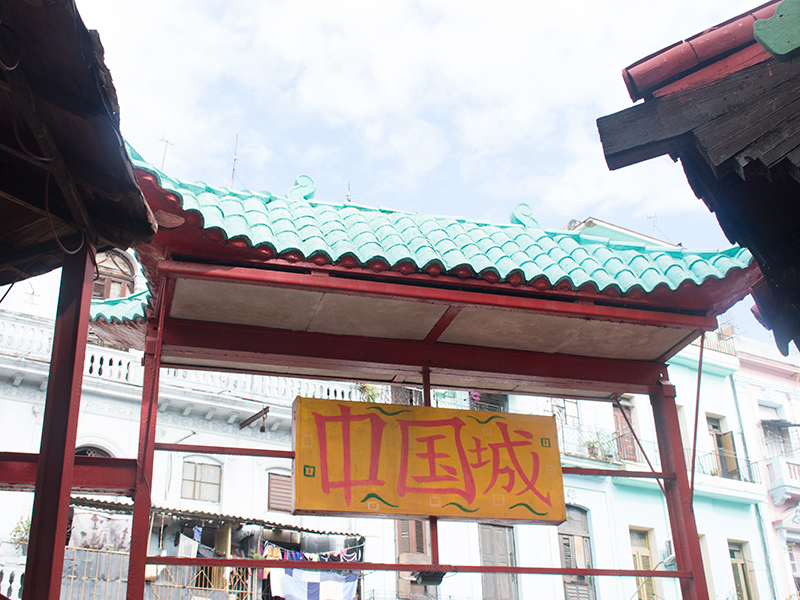 Near the end of Calle Cuchillo in Havana’s Chinatown neighborhood, Tientan restaurant has stayed open for over 20 years. In all those years, however, the shortage of soy sauce has never gone away.

China’s exports to Cuba declined from $1.9 billion in 2015 to $1.8 billion in 2016 as a result of Cuba’s payment problem. After Hurricane Irma, The Cuban government has been unable to meet its due payments to China, because it rerouted some of the money to reconstruction efforts. As Cuba’s largest trading partner, China sends food, transportation equipment and more to the island every year.  But the decline in trade is affecting small businesses and regular people, Juan Triana, a prominent Cuban economist, said.

“The lack of supplies usually depends on the prices and regular people are facing the rising of prices,” Triana said.

Every year, Cuba receives more than 80% of its imports from China, Spain, Brazil and Vietnam. Most goods and transportation are marked as made in China. Many of these goods, however, come in suitcases.

“I would ask my family to bring me toilet papers every time they come to Cuba because it is very hard to get it,” Wei Zhang, the dean of the Confucius Department in Havana University, said. “In Cuba, demand normally exceeds supply, and the more you buy, the more money you pay. You might get a better price for buying a pack of beer in China or the United States, but you have to pay more money for a pack here.”

China should have helped Cuba as the “socialist brother,” but it ended up cutting Cuba off because Cuba cannot buy as much as before, Gregory Biniowsky, a business owner and the only foreign lawyer authorized to work in Cuba, said.

“If you talk to a businessman, Cubans always pay their debts but they always pay late,” Biniowsky said. “But a lot of exporters and investors have been frustrated because Cuba delays payments.”

“For example, from China we import a lot of food, transportation, equipment and the heavy machinery, and we cannot produce that because Cuba does not have the technology to produce that,” Triana said. “[The decline in imports] has a relationship with the growth of the domestic products, but not always.”

“Cuba’s industry is in poor condition,” Cristina Escobar, a Cuban TV journalist, said. “It is naive to think about developing internal manufacturing because we are a poor country.”

Even though China’s imports have decreased, Triana thinks that this will not affect the commercial relations of these countries in the long run.