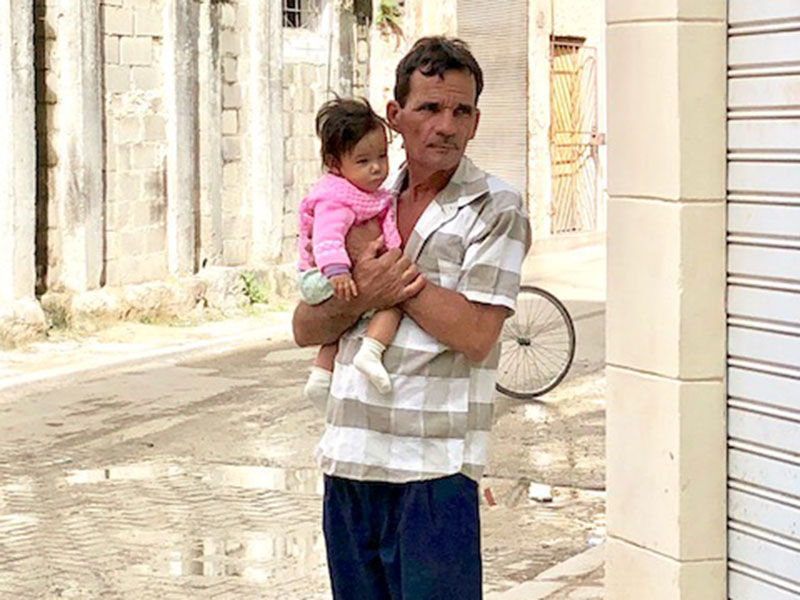 Lassara Sanchez, a 53-year-old baker in Havana, has a brother living in Florida as a “pies secos, pies mojados” recipient. Sanchez is one of thousands of Cubans with mix feelings regarding the policy.

“I see why a lot of Cubans would leave because of economic problems, but many people died,” Sanchez said. “I don’t like that my brother is far away, but what can we do?”

“Pies secos, pies mojados,” in English “wet foot dry foot,” was an immigration policy started by the Clinton administration in 1995 that gave Cuban exiles political refugee status if they could make it to American soil. Around 30,000 Cubans migrated to the United States every year under the policy before President Obama terminated it during his last days in office as a token of goodwill to the Cuban government.

“It’s sad that the Obama administration terminated this policy, because now we can’t get rid of the people who are not part Fidel’s revolution,” Sanchez said.

The policy has created family divisions between Cubans in exile in Miami and those in the island.

“This policy has unfortunately taken many lives, and has separated me from my daughter,” Martinez-Ramirez, a 55-year-old taxi driver with a step daughter in Florida, said. “She left the regime and comes once in a while, but not as often as I would like.”

Many Cubans on the island say that the policy is good for those who are not part of the revolution, because they can exile with little consequences.

“If you’re not part of the revolution you can leave, but as Cubans. You can return anytime,” Sanchez said.

Some in the island saw the change of policy as unfortunate but worthwhile and necessary.

Estrada said that he would only ever leave Cuba for economic reasons. Pies secos, pies mojados recipients automatically received residency status in the United States. They also received food stamps, job training and an education.

The special status given to Cuban exiles in the US became a source of resentment for some of the Cubans who remained on the island.

“The Miami Cuban community are an old group of privileged individuals,” Cristina Escobar a 33-year-old journalist and Cuban TV star in charge of the morning news, said.

Escobar also said that she was pleased to see the end of “pies secos, pies mojados”, primarily because of all the lives being saved. She also saw it is only fair to other immigrants.

“That’s good because now you’re going to be the same as any other immigrant, because then you’re going to suffer in your own skin what it is to be a dreamer, what is to have a child in the U.S and living the risk of being deported and leaving them behind,” Escobar said. “ Cubans never had that problem. A lot of them belonged to a bourgeoisie in Cuba and they still feel important.”

Other Cubans on the island also believe that some were taking advantage of pies secos, pies mojados.

“I believe that it was the best thing that could of happen because of the deaths and because Cubans were taking advantage of it,” Jesus Enriquez a 59-year-old a taxi driver with a daughter in Miami, said.  “The government is good here.”

There are some who say this immigration policy has been used as a political retaliation against the Cuban regime to try and bring them down.

“The logic is political points,” Gregory Biniowsky, a lawyer and owner of a Russian private restaurant in Havana, said. “What makes Cuba looks worse, a bunch of Cubans going and legally getting their visas and getting on a plane and flying to Miami, or a bunch of Cubans getting on boats and hoping to get on land and get benefits? The whole rafter thing makes Cuba look like a really bad place to be, and the United States government preferred Cubans getting on boats and getting on the news then quietly on planes.”

Luis Sanchez, is a Junior transfer journalism major student, with a broadcast track. Originally from New York City and having a passion towards television, made him choose Stony Brook University. His interest in journalism came at a young age, due to his parents being television news watchers. Luis enjoys Spanish-Language media and hope's to work on Univision as a news reporter one day. Primarily because of the current issues affecting the hispanic community. Luis enjoys talking politics, working on movie sets as a talent, and advocates for immigrant rights. View all posts by Luis Sanchez