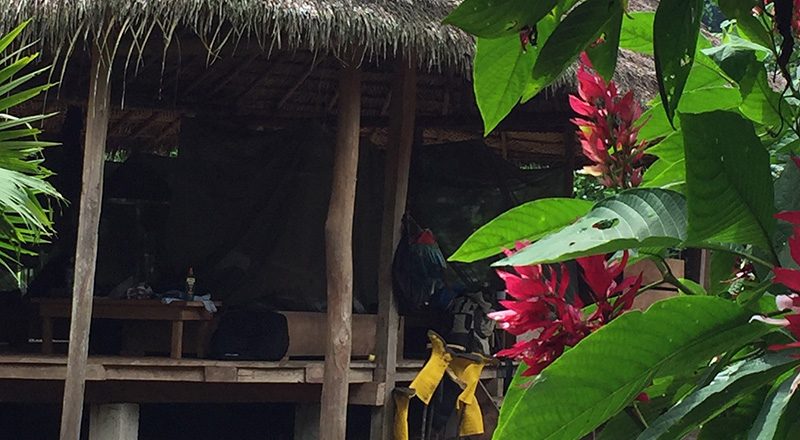 Two hours after the sun has set and most of the Sápara are settling in for the night, Hilario Gualinga is still at work in a kitchen two miles from his own. He is cleaning up from a dinner he cooked for nine guests, who have moved away from the table to gaze up at the glittering equatorial constellations.

One of them yells at Gualinga to turn off the lights. He is left to wash dishes in complete darkness.

“Of course, I wish I could help out more at home, but I have a responsibility to my community, for the Sápara, to protect this territory,” Gualinga said.

Gualinga’s responsibility is for the Naku Project, an ecotourism attraction that brings 150 to 200 visitors annually into the Sápara territory along the Ecuadorean headwaters of the Amazon River.

The Sápara are an indigenous nation with fewer than 500 people remaining, from the hundreds of thousands they were in the early 20th century. They live in the southeastern side of the Ecuadorean Amazon basin, a 20-minute flight from the nearest town, Puyo. After he finishes cleaning the kitchen at Naku, where paying guests enjoy limited electricity, cots draped in mosquito netting, toilets, showers and daily cleaning service, Gualinga will hike through the jungle and cross the Conambo River to return to his family. He lives in a compound of thatched, open-sided buildings with his wife, Luisa, three young sons and a one-week-old baby, along with chickens, a tame macaw and a pack of hunting dogs.

Time away from traditional domestic life is the compromise that indigenous communities face when maintaining ecotourism projects like Naku.

The Sápara, working with an Ecuadorean foundation called Terra Mater, created the Naku Project in 2013. The project is a response to threats by the Ecuadorean government to allow foreign oil companies to explore for, and extract oil in Sápara territorial reserves. Naku, the Sápara word for “jungle,” is an alternative, an economic initiative that the Sápara hope will support them in their battle to preserve and defend their way of life and the ecological health of the Amazon Basin.

Ecuador, an OPEC member, is rich in oil and other natural resources. This presents many opportunities for development, but it also raises questions about the social responsibility of those involved in the exploitation of these resources.

No one denies that past resource extraction in Ecuadorean Amazonia led to gross contamination, deforestation and destruction of communities, Luis Calero Hidalgo, a legal consultant and former energy minister of Ecuador, said during a conversation with JWW. But the champions of the extractive industries say that Ecuador’s 2008 constitution established a firm commitment to human rights, labor rights, the “rights of nature” and anticorruption efforts.

Companies can responsibly and carefully extract oil from Amazon territories because of the high standards set by this legal framework, said Eduardo López Robayo, a former minister of energy and mines and the founder and and CEO of SERTECPET, a Quito-based multinational company that manages more than 250 oil-drilling systems in Ecuador. And sooner or later, he said, that extraction will happen.

“In the end, the country needs these resources to grow,” López Robayo said.

The Sápara are committed to sharing their traditional way of life with the external world in hopes that these outsiders will cooperate and protect the jungle.

“We are a culture that is disappearing,” Manari Ushigua, 43, a spiritual healer who is the chief spokesperson for the Sápara, said to the guests as they gathered around the table after a tobacco cleansing ritual under the stars. The lights came back on, and Gualinga continued to work in the kitchen behind them.

“We don’t have many left, so when people visit our community, it strengthens our souls and renews our drive to fight for our home,” Manari said.

For these ecotourism projects to have a chance at success, an indigenous group needs high motivation, a fair distribution of work and benefits for members of the community, and well-developed infrastructure, Carlos Larrea Maldonado, a social science professor at the Universidad Andina Simon Bolívar, said. Larrea has spent decades studying the impact of resource extraction and deforestation on climate and communities in Amazonia and has visited many projects similar to Naku.

Such projects need people who are willing to work hard, as Gualinga does.

One out of three ecotourism projects is successful, Larrea said. The ones that fail often faced internal conflicts or lacked resources and training.

“As far as I know, it is a good project because the Sápara leader, Manari, has a lot of knowledge of his own culture,” Larrea said.

The indigenous people of Añangu in Yasuní National Park on the Napo River, on the north side of the Amazon basin, created a successful ecotourism project that still prospers today. Twenty years ago, the 100 families of the community made a difficult internal decision to stop hunting. People come to Yasuní to see the area’s unique biodiversity and animals, and the Añangu realized that if they continued to hunt, animals would leave their territory and the tribe would not be able to profit from tourism.

Although it is often hard to predict which projects will flourish, these initiatives can be realistic alternatives for indigenous Amazonian communities, Larrea said.

Naku could generate more projects such as bringing secondary education to Llanchamacocha, Mauricio Rodas, 22, a Kichwa man married to a Sápara woman and the father of two, said. This would allow students to stay within the community to finish school.

Naku could also help establish better access to healthcare outside the community when necessary. At present, the Sápara pay up to $600 for a round trip to Puyo, the nearest town with a hospital. Revenues from ecotourism allow them to save up for these emergencies.

“We want to empower the communities and the people and show them that they can do something that is more sustainable and long-term to generate economy without extracting oil,” Rodas said.

From an outside perspective, ecotourism itself may bring its own problems, such as the potential threat of acculturation — the loss of ancestral traditions — as remote communities feel the influence of Western civilization. But the Sápara believe this compromise to be essential.

“Culture evolves, and it is important to preserve the knowledge of our history and defend the jungle,” Domingo Peas, leader of the Achuar people of Ecuador, said. “And the safest way to do that is tourism.”

When people visit indigenous nations such as the Sápara, there is an exchange of information and knowledge.

“Controlled touristic development will not have too much of an impact on our cultures,” Peas said.